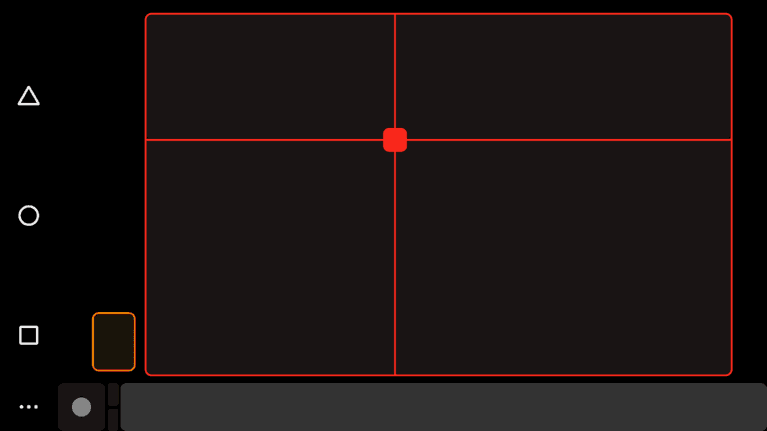 HOW IT WORKS HOW TO CREATE ONE?   LASER POINTER FORUM

Steps to play with it:

1) Place the Laser GUN wherever you want (in the range of the WIFI, it can be 60 meters away!)

2) Use your Smartphone/Tablet to control the laser/torch

3) Have fun! (no one will ever know who is controlling that laser/torch located on the top of the tree!)

Perfect for my cat! Why not automate this to make my cat play every….uhh…6 hours? Fetch the point!

How does it work?

Laser pointer is a remotely controlled arduino robot created with 3D printed parts. With only two servos, this robot is able to point any object in the X and Y axis. The amplitude of the movement can be configured in the CODE. You can control its movements by sending commands through a Smartphone, Tablet or PC WIFI. The maximum signal range is up to 50-60 meters.

How does a SERVO MOTOR work? (click here for some Theory)

They are small in size but pack a big punch and are very energy efficient. Because of these features, they can be used to operate remote-controlled or radio-controlled toy cars, robots and airplanes. Servo motors are also used in industrial applications, robotics, in-line manufacturing, pharmaceutics and food services. But how do the little guys work?

How is the Servo Controlled?

Servos are controlled by sending an electrical pulse of variable width, or pulse width modulation (PWM), through the control wire. There is a minimum pulse, a maximum pulse and a repetition rate. A servo motor can usually only turn 90° in either direction for a total of 180° movement. The motor’s neutral position is defined as the position where the servo has the same amount of potential rotation in the both the clockwise or counter-clockwise direction. The PWM sent to the motor determines position of the shaft, and based on the duration of the pulse sent via the control wire the rotor will turn to the desired position. The servo motor expects to see a pulse every 20 milliseconds (ms) and the length of the pulse will determine how far the motor turns. For example, a 1.5ms p
ulse will make the motor turn to the 90° position. Shorter than 1.5ms moves it to 0° and any longer than 1.5ms will turn the servo to 180°, as diagramed below.

The servo circuitry is built right inside the motor unit and has a positionable shaft, which usually is fitted with a gear (as shown below). The motor is controlled with an electric signal which determines the amount of movement of the shaft.
What’s Inside the Servo?

When these servos are commanded to move, they will move to the position and hold that position. If an external force pushes against the servo while the servo is holding a position, the servo will resist from moving out of that position. The maximum amount of force the servo can exert is called the torque rating of the servo. Servos will not hold their position forever though; the position pulse must be repeated to instruct the servo to stay in position.

Now… How to create a remotely controlled laser pointer

a) Install the Arduino IDE on your PC from (skip this step if you have arduino already installed)
This B-robot code has been tested and developed on IDE version 1.0.5

b) Install the libraries (https://github.com/jjrobots/B-ROBOT/tree/master/libraries)
Copy the folders inside the /libraries into the Arduino/libraries folder on your hard drive and restart the Arduino IDE
JJROBOTS_BROBOT
JJROBOTS_OSC
c)  Get the main CODE: LaserGUN with PRO MODE (.zip file)

d) Compile and send the code to the Arduino Leonardo

Using the acrylic case (if you got any of the jjRobot´s robotics KITs): Above: Fix the Arduino Leonardo + jjRobots Brain Shield to the bottom of the case using 3 short bolts + nuts. Do the same with the plastic laterals as shown above. Above: Fix the “BASE” servo to the support piece and attach both to the acrylic TOP lid. Use two screws to fix the servo to the plastic holder. Above: This is how it looks now. If you want place the torch on its holder now ABOVE: Assemble the plastic parts as indicated. For this, we have placed the servo´s arm inside the existing hollows (that will avoid the servo´s arms to skip) and fixed using the remaining screws. Keep in mind, everything should be rotating freely. NOTE:You might need to re-adjust the rotational limits of the mentioned arms once the torch/laser pointer is working. This is where we are now. Almost ready to play with it.

Connect the base servo to the SERVO1 header

And… fix the top lid to the case using 4 bolts. Now you are ready to play with it. Jump to the assembly step FOURTH NOTE: If you got the “MOST AWESOME ROBOTICS KIT” you can use the battery holder provided.

Controlling the LASER GUN via  WIFI:

To control the LASER GUN, we use OSC protocol over an Internet connection (Wifi module) using UDP packets or the jjRobots official APP (free).  Both are a lightweight and efficient way to send commands to our Robots.

Advantages of the TouchOSC: We could also  personalise the Interface we are using in our device so we will be able to control anything!  What we need to do is to implement a lightweight library for Arduino in order to support this protocol (easy). We only use a subset of the OSC protocol to keep things small.

LINK: LASER GUN REMOTE CONTROL LAYOUT PRO MODE for OSCtouch software (Android Version/ iOS version)
HINT: There is a PRO MODE in this control layout (tap on the small orange box in the corner). Activating it will give you access to a more aggressive laser movements behavior. That means, more amplitude of movement in each axis.

Operational range: We have been testing this robots and can be controlled from up to 50-60 meters away (no one will know you are behind >:-D )
Setting up the TouchOSC software:

If you are going to use the Touch OSC software to control the LASER POINTER, you will need to set these parameters in the TouchOSC like this: Populate the fields with these parameters

How to modify the amplitude of the laser (servos) movements

Inside de ARDUINO CODE, at the beginning, you will see these text lines:

//These are the values (in red) that determine the amplitude of the movement. If you have a small screen, could be better to set smaller values

With the same electronic and some other parts (stepper motors) you can create your own B-robot (the self balancing robot!)

Some info was taken from: http://www.jameco.com/jameco/workshop/howitworks/how-servo-motors-work.html 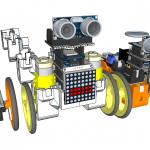 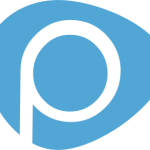 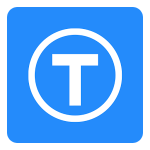 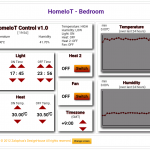 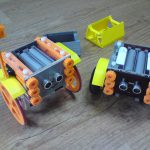 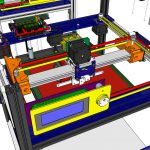